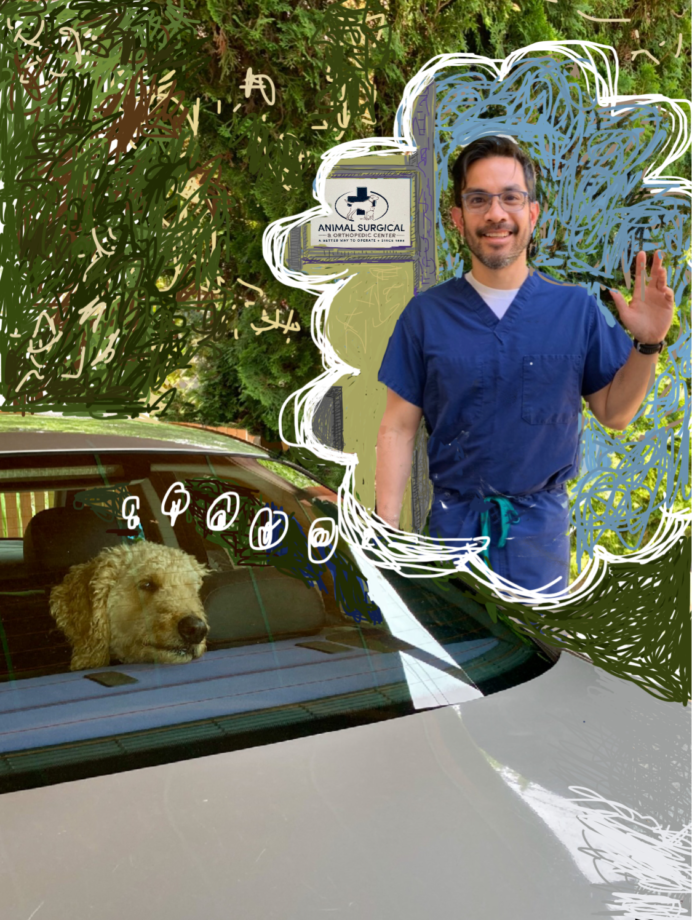 Just when I was starting to get attached, you told me we wouldn’t be seeing each other anymore. This seems like a mixed message. You told me you were happy with my x-rays. You said I was looking good. You petted me, looked deeply into my beautiful brown eyes, and smiled. I decided maybe your place wasn’t so scary after all. And then you said goodbye.

Granted, my overall memory of Animal Surgical Center was less than a thrill from a dog’s perspective. But still, it seems like a rather sudden separation, just when I was getting to know you.

I will say that whatever you told Caryn, it worked. When we got home, she took away the baby gates, and left the doors open for me to free range. Then she took the obstacles off the furniture. I took that as a good sign but didn’t waste any time asking questions. 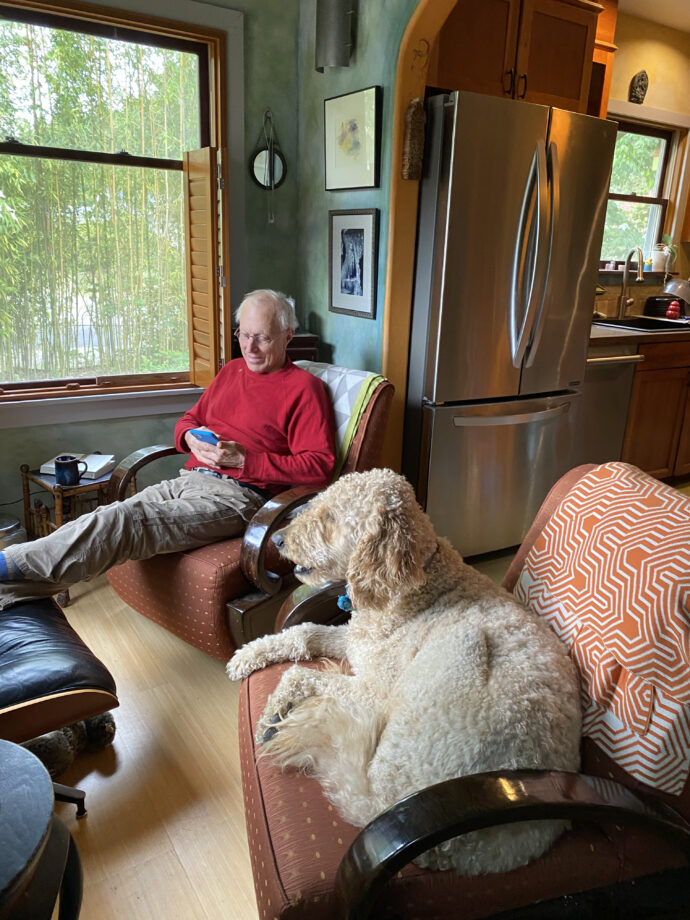 Anyway, I’m very happy, because yesterday we went for a 40 minute walk, which included a small hill (woohoo!). I think that means I’m back in training, for hikes, off-leash freedom, and puppy play euphoria!

Meanwhile, back at the ranch, there’s been lots going on. Hot sunny days have spawned tall cool treats 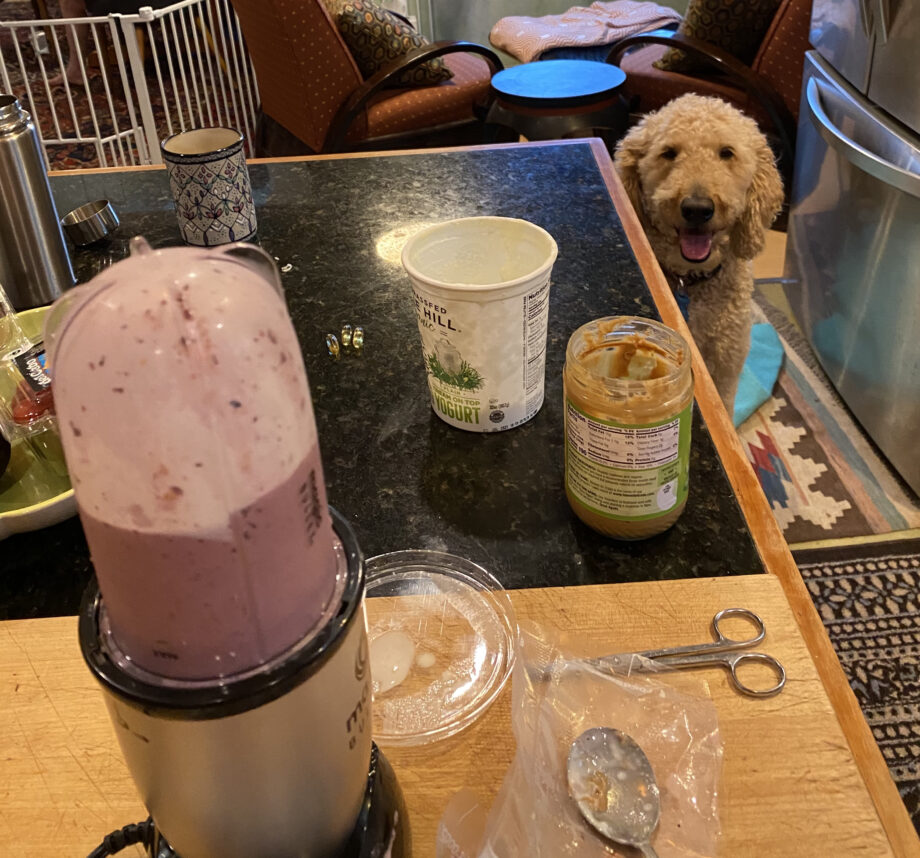 Caryn got a Magic Bullet, one of those whirly-gig things that spins out deliciousness 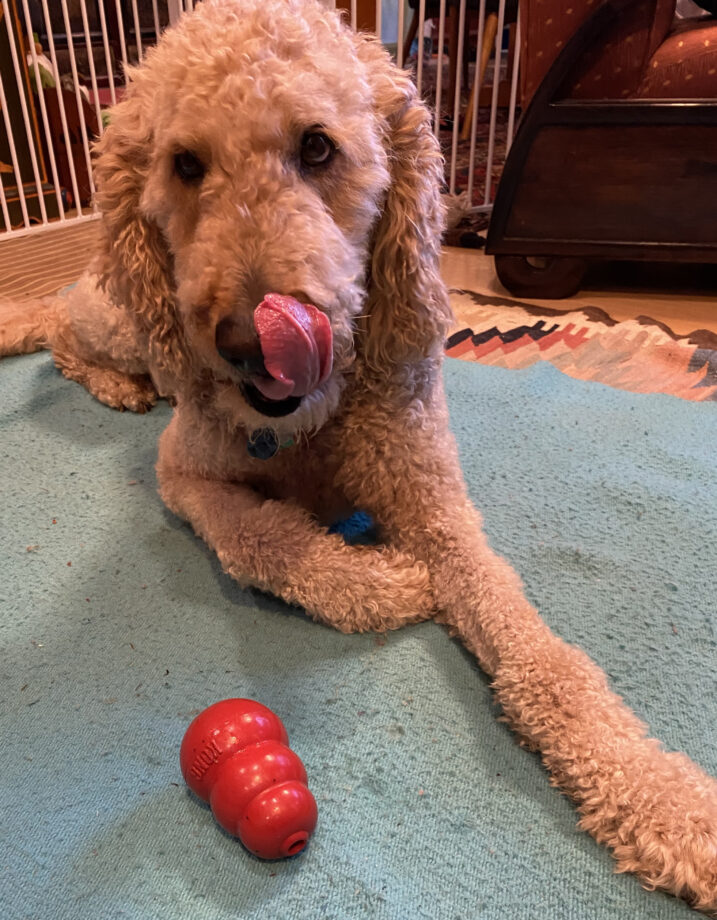 Favorite recipe #1: plain yogurt, frozen blueberries, and tahini or other nut butter, blended together, frozen in ice cube trays and stuffed into a Kong on a nice hot day. Work on that and then take a nap in the sun. I think that counts as part of the rehab program, right? 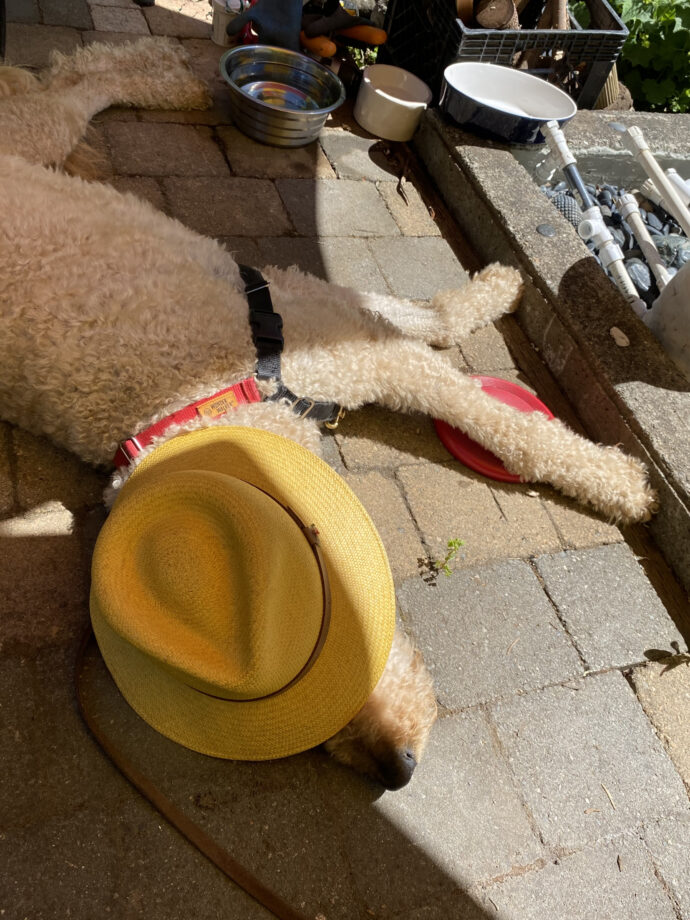 (yes that’s a frisbee in my paw but don’t worry, Dr. Alex, it’s just for show). We didn’t get to lie in the sun for very long though, because this happened: 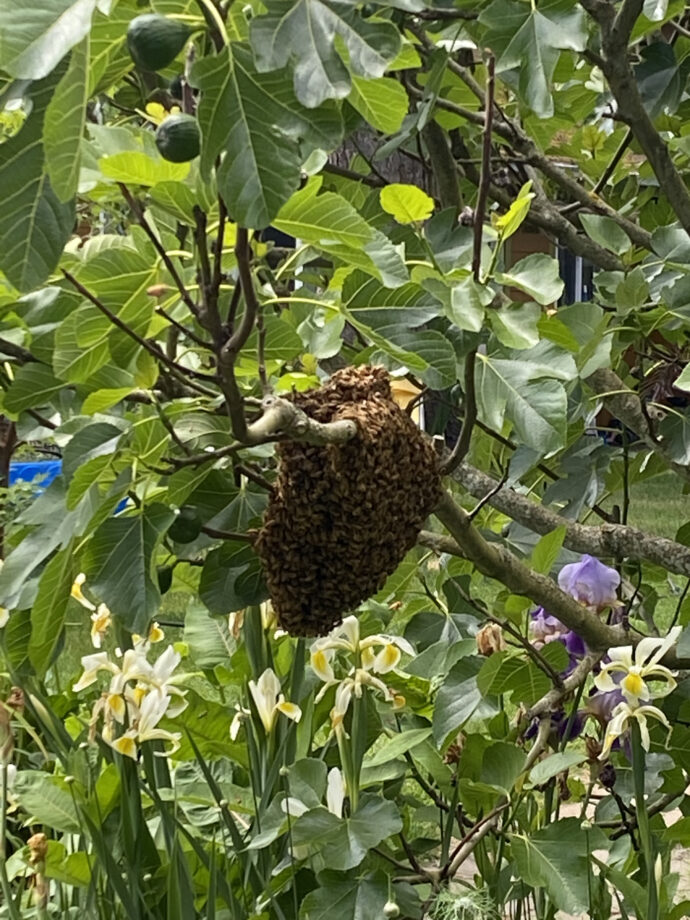 some of our bees (maybe 20,000 of them) decided to make a new home, only they didn’t know where, so they had to hold council in the fig tree. Mr. Marlin the Bee Man came to help them out. He brought them a new home. 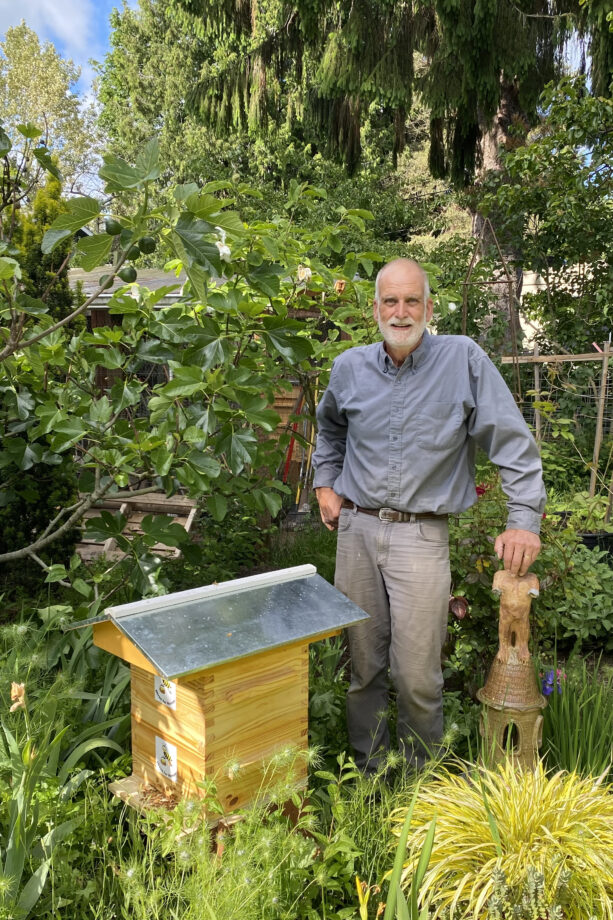 But the next day this happened: 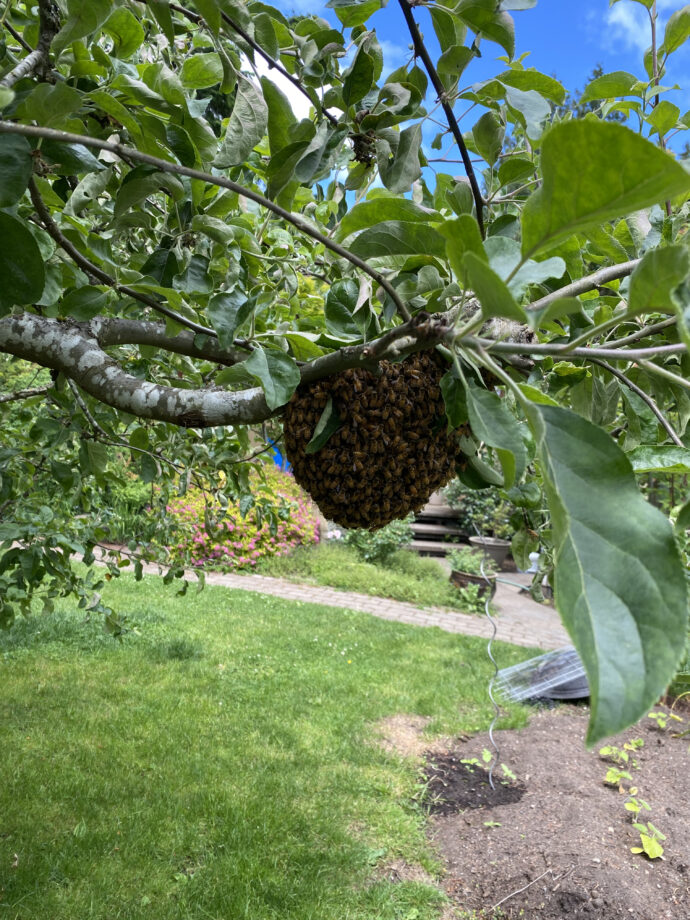 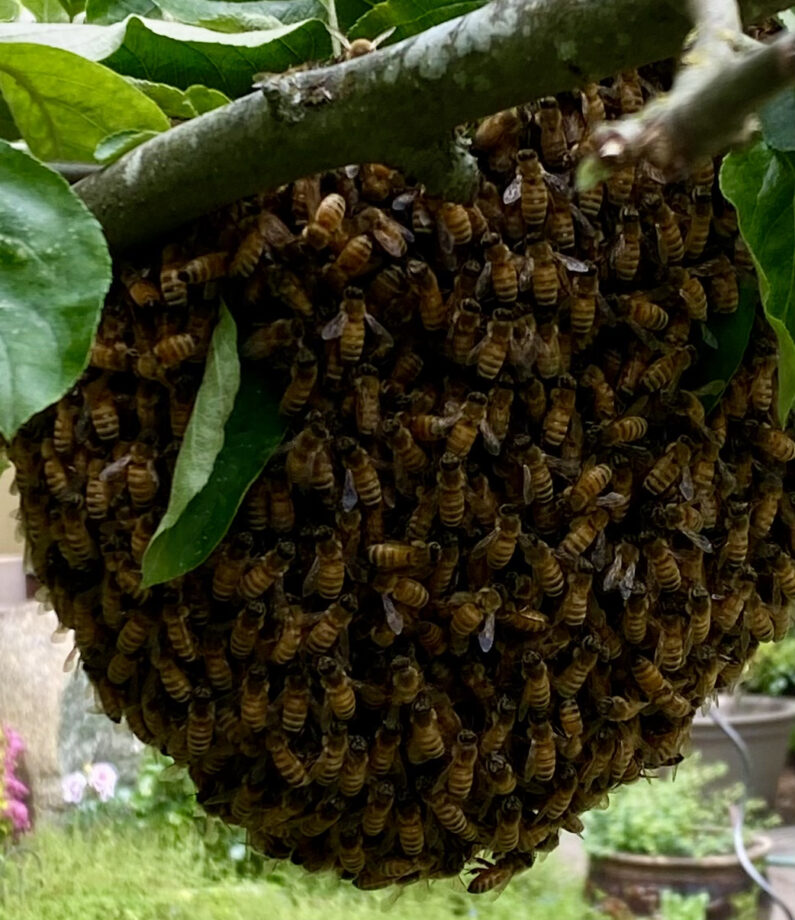 Maybe they had some requests for the landlord before moving in, because some of them (10,000 or so – honeybees aren’t given to social distancing) left their new home and gathered at the apple tree to discuss the situation.

Along came Marlin again, who gently persuaded them to take up residence again. And you won’t believe it (Marlin didn’t) but yesterday there was another swarm of bees, smaller yet, in the apple tree again. This one was a mystery swarm, because the door is closed on the new hive so the bees can get used to their new digs, and when we peeked in the window they were happily festooning away. Marlin came again, and gathered them up, this time in a temporary box (decorated by his granddaughter Lizzy). They went home with him where they went into his observation hive. He thinks our garden is a bee magnet, and a hive from somewhere else decided to come join the party. 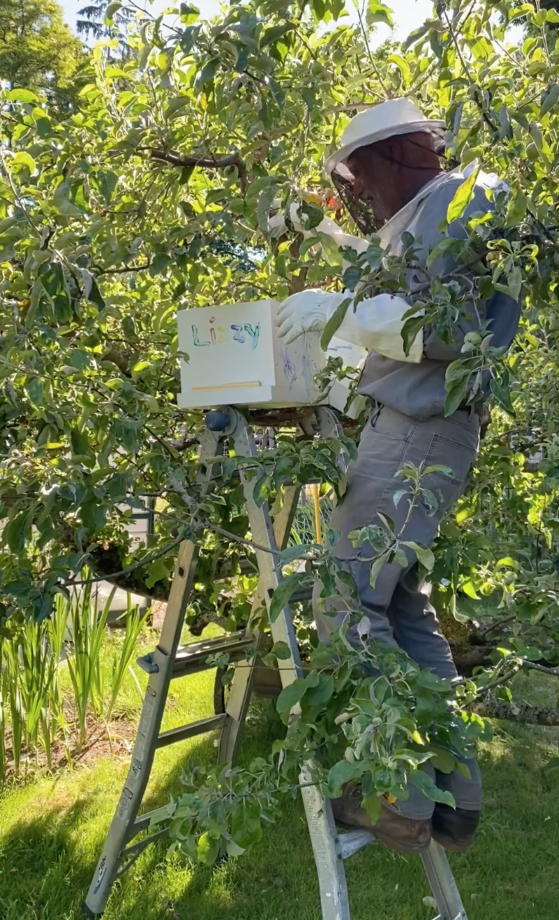 So it’s been that kind of week! I wonder what’s been happening in your life..I’ll keep you posted on future events. In the meantime, when the sun comes back, have a nice cool treat and a good nap. Love, Tashi ♥