This week, I graduated from being a dog….to being a dog with a blog! You see that photo of me with the computer? Well, that was a setup. My paws are too big to manage a human keyboard. So my human has to do the typing. I think things through, and my human figures out what I’m thinking, and she types it out for me.

I have lots of thoughts, believe me. Thoughts about frisbees…. 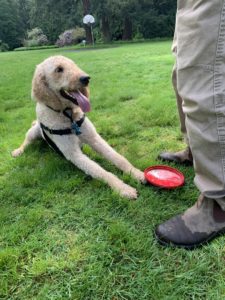 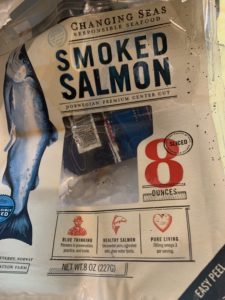 And long walks in the woods. 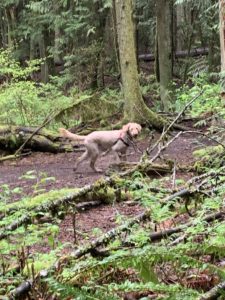 I think a lot about my friends, both furry 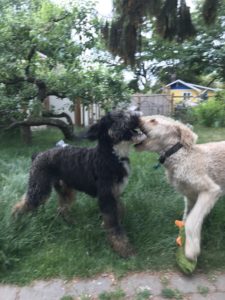 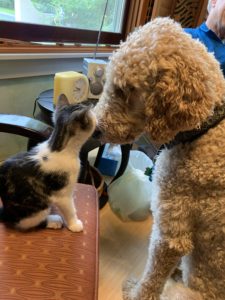 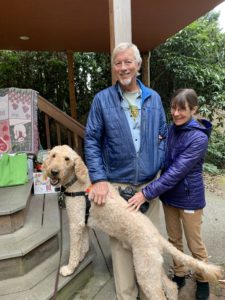 Yes indeed, I have many things on my mind. I don’t spend all my time sleeping. Just some of it. On some very comfortable sofas, if I can manage it. 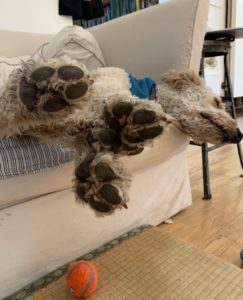 In fact, I think about so many things that Caryn (my human) had to start writing them down. It took a little while to convince her that it was the thing to do, but she finally came around. It all started during this thing humans are calling a pandemic. I call it “The Time of Not Seeing Friends”. That’s because I’m a very friendly dog, but we are not seeing very many friends right now.

I had much to say, but when it became the Time of Not Seeing Friends, I started missing my pals. Caryn uses the computer all the time to talk to people, so I thought maybe I could too.

I mean, why not share more of me? So I suggested to Caryn that she take me live.

I mean, yes, I’m already alive. But I mean “live” as in online. I could be famous if Caryn made a blog about me. Actually, I’m already famous. Humans like to make pictures of me, like this: 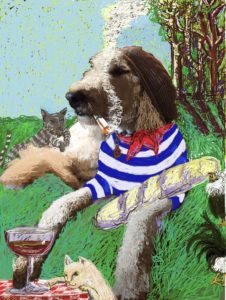 That’s me if Caryn had named me Pierre, in honor of the French side of my family. But I’m glad she named me Tashi, because I don’t think I would be very comfortable in all those clothes. And Tashi means “hello”, in Tibetan. Did you know that?

Besides being famous, I thought I could talk to kids, and in return, if kids want to, they could send me pictures of their pets or things they like, or drawings, and they could talk about their lives right now. Maybe you would like to talk about this strange upside-down life we are living. And maybe that would make you feel good. After all, I like to help out, that’s my job.

I think kids would like what I have to say. Because Trudy, my almost-4-year-old friend, likes to read what Caryn writes for me. She sends my writing and pictures to Trudy’s mama, and her mama reads them to Trudy before bedtime. Sometimes Trudy makes her mama read a bunch of them, one after the other. Now that’s a fan!

Here’s a picture of Trudy dressing me up in flowers: 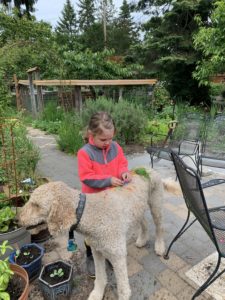 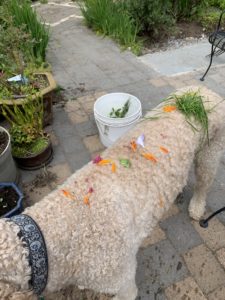 So Caryn said she’s making me a blog. Because she’s part of my team. ISN’T THAT COOL?!!

I think I’ve made you tired with all of my talking, and you probably want to do something else now. But I’ll write more another time, and I’d be happy if you write to me. I might even post it if you like!